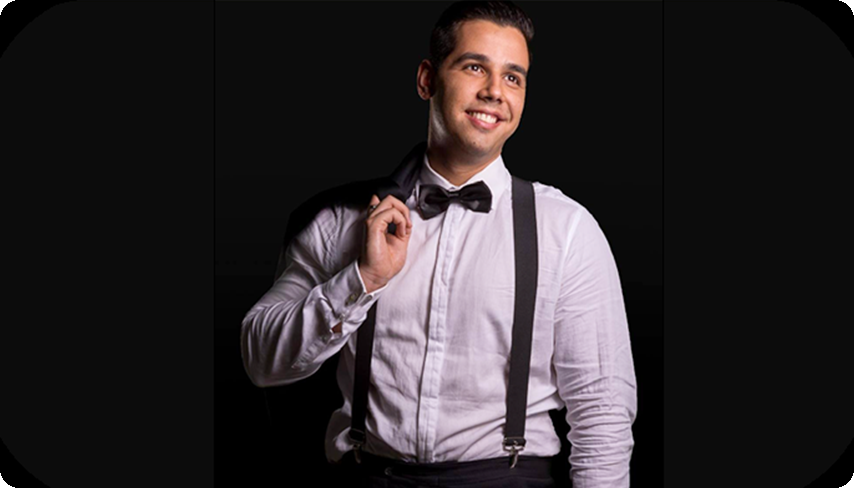 When Angel Macias joined the choir at The Light of the World congregation in Monterrey (La Luz del Mundo), he never dreamed that singing praises to God would steer him on the path to opera.

However, the talented singer’s resonant tenor captured the attention of his congregation, and before long, he was singing regularly at the numerous cultural events hosted by The Light of the World congregations. The joy he experienced performing for his community convinced him that music was destined to become an even larger part of his life. His talent put him in the spotlight, and Angel started winning the lead role in numerous renowned operas.

Still, he wanted to learn more.

Encouraged by his peers in his choir, Angel applied and was accepted to the Monterrey College of Music and Dance, where he worked to improve and develop his vocal technique. When he later joined the Opera of Nuevo Leon, his singing career took off: he was cast in the grand operas Samson et Delilah, Romeo and Juliet, and Turandot.

But Angel wasn’t going to stop there. Determined to continue growing as a vocalist, he applied and was accepted to Estudio de la Ópera de Bellas Artes, a competitive educational program focused on artistic improvement.

He subsequently performed at the prestigious Palacio de Bellas Artes, where he played Rinuccio in the comic opera Gianni Schicchi, Prince Calef in Turandot, and Harry the miner in La del West.

Angel’s most significant accomplishment to date is winning first place at the San Miguel de Allende opera competition in 2019. Angel was also a finalist in the Carlo Morelli National Singing Competition held at the Palace of Fine Arts Theatre, where he received the Fine Arts Award for his performance.

Angel believes that singing is more than just beautiful music ­– it is his own special way of worshipping God. It is through singing, Angel says, that he can most passionately express the feelings in his soul to God.

“Singing is a way of expressing my gratefulness and love to Him; to give Him glory, to honor Him,” Angel said.

He hopes that students who wish to study classical music will learn more than mastering an instrument or perfecting their vocal technique. He believes the world of classical music is holistic and can also help young people expand their knowledge of painting, literature, languages, and different cultures.

For Angel, “art is a footprint that humans leave on the world,” because contemporary operas address social problems and portray them artistically and record the path of humanity. He believes music also allows young people to explore deep feelings and helps them develop greater social values in a world that can often feel uncaring.

Want to see Ángel Macías in action? Check out this beautiful performance of “Che gelida manina” in La Bohème, by Giacomo Puccini:

The youth of the Light of the World Church were present at the event held at the Maggie Trejo Cultural Center in Lubbock, Texas.

The Light of the World Awarded for Community Service in Guatemala

"This is the result of the work and instruction that the members of the congregation receive in order to be better citizens, in solidarity with society and respectful of the laws; always working for the aggrandizement of their social environment