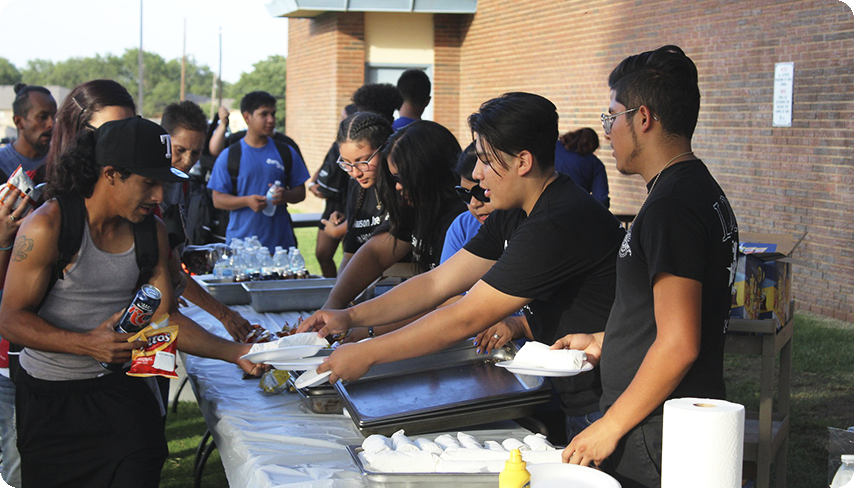 When the City of Lubbock, Texas, hosted a backpack giveaway during a recent National Night Out, a youth group from The Light of the World congregation in Lubbock was proud to join in and support their local community initiative.

While city staffers distributed backpacks and served hotdogs to hundreds of kids from underserved communities, the youth group members shared smiles, water, and snacks with the people who came to the Maggie Trejo Supercenter for help.

“It was a great event,” said Cecilia Gonzalez, director of the Maggie Trejo Supercenter. “They had so much fun out there.”

“There is so much need,” Gonzalez said. The event also featured appearances by the police SWAT team, the mounted patrol on horseback, a performance by a mariachi band, and a ballet folk dance.

Participating in the City of Lubbock event was just one example of how The Light of the World youth always strive to lead by example and make a positive difference in their communities.

At the end of the event, many of the people who attended thanked the youth group for their participation.

Opera Singer Launched Career in The Light of the World Choir

"Singing and musical development, allows the mind to be opened and contributes to a better understanding of society and the world"

The Light of the World Awarded for Community Service in Guatemala

"This is the result of the work and instruction that the members of the congregation receive in order to be better citizens, in solidarity with society and respectful of the laws; always working for the aggrandizement of their social environment