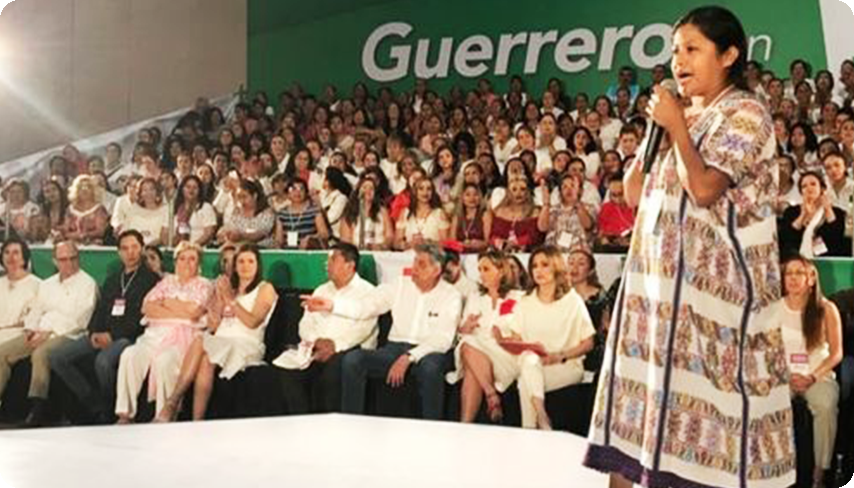 Araceli Lopez del Rosario grew up in humble conditions, but the determined young entrepreneur never let life’s hardships interfere with her dreams of starting a business.

Today her “Taxua” brand exports handmade textiles and gourmet chocolates to countries like the United States and Canada. Araceli also uses her business to promote the Amuzga culture and its traditions. At 36, Araceli attributes her success to hard work and a devotion to teachings of The Light of the World faith (La Luz del Mundo).

When she was just 10, Araceli had to move in with her aunt to Piedra Pesada, Mexico in search of better opportunities. Together, they sold bread and harvested tomatoes.

“Since I was a child, I aspired to become someone in life, even if poverty was an obstacle,” Araceli said.  But poverty wasn’t her only obstacle as Araceli was often mistreated for her religious beliefs. Her classmates made fun of her because she was a member of the local Light of the World congregation. And even though The Light of the World teachings are based on the well-known Christian principles rooted in the Holy Bible, her classmates were unfamiliar with this faith and didn’t understand it.

“They teased me because of the way I dressed, and for believing in what others did not believe in,” Araceli recalled.  Her faith was never shaken. She attributes her success to her faith and a refusal to give up on her dreams of running a business.

At the age of 22, she had the idea to market traditional goods from her region. In 2008, she began participating in a variety of regional, state, and national events that promoted the Amuzga culture and traditions. The culture is primarily based on agriculture – specifically cacao for the production of artisan chocolates along with ceramics and handmade fabrics embroidered with geometric or animal shapes woven on backstrap looms. Araceli’s plan was to eventually sell her products outside of her state.

Araceli hoped that her business would become a key employer of single women. Her “Taxua” brand includes handmade artisanal chocolates and textiles that are woven on backstrap looms. Taxua was registered by the Mexican Institute of Industrial Property in 2009.

The governor of Guerrero and the Mexican Secretariat for Women recognized Araceli’s work on April 27, 2016. She received an award for following her dream, starting a business and creating jobs for single women so they too could attain economic independence.

In 2017, Taxua began participating in international events such as World Food Poland, Restaurants Canada Show, and Encuentro Binacional del Migrante Guerrerense (Binational Encounter of the Migrants from Guerrero) in Santa Ana, California.  It was at this time, Araceli began exporting her products to the United States and Canada.

Today, more than 100 farmers benefit from her business.

Betania Delgado Rivera has given the best years of her life to serving her community.

When a raging fire swept through the Central de Abastos Market in Oaxaco, Mexico, four members of the local Light of the World Church congregation (La Luz del Mundo) were among the almost 100 merchants who lost everything.